PowerShell is an advanced form of command prompt. It is extended with a huge set of ready-to-use cmdlets and comes with the ability to use .NET framework/C# in various scenarios. Today, I will show you how to start a process elevated from the PowerShell prompt.

Earlier, I covered how the same can be done from a batch file. However, with Windows 10 Creators Update, Microsoft is going to de-emphasize the command prompt and promote PowerShell everywhere. See these articles for reference:

So, it is a good idea to learn this useful trick which can be performed from the PowerShell console and save your time.

Start a Process Elevated from PowerShell

For this task, we'll use the Start-Process cmdlet. It supports a number of options, one of them is -Verb. If you specify -Verb as "RunAs", the process you are going to start will be opened elevated.

Note: If you press the "No" button at the UAC prompt, the PowerShell console will print out an error message "The operation was canceled by the user.". This is expected. 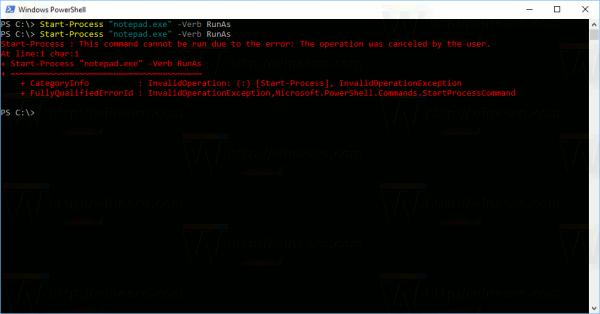 Tip: You can run an app elevated with the help of PowerShell directly without opening its console first. For example, you can create a shortcut or type the following command in the Run dialog:

The result will be the same. The Powershell window will flash for a moment and then the app will be opened elevated. 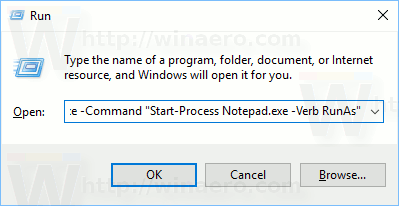 Start a Process Elevated with Arguments from PowerShell

If you need to pass some arguments (also known as switches or parameters) to a process that you are going to start elevated from PowerShell, use the -Argument switch of the Start-Process cmdlet. Argument specified there will be passed to the target executable file. Here are modified examples with Notepad.exe I used above.

For the PowerShell console, use the following command:

Enclose the paths that have spaces in quotes. If you need to pass more than more argument, separate them with commas and use ArgumentList:

From within PowerShell, you can use the following command:

See the article for more information: Create A Restore Point in Windows 10 with PowerShell

Enclose the paths with spaces in single quotes as shown above.
That's it.

1 thought on “Start a Process Elevated from PowerShell”