Starting with Windows 10 build 17063, the Snipping tool has got a new feature. The application now has a special button to open the Paint 3D app directly. Just a single button seems to be added.

The new button is now located at the end of the toolbar. See the following screenshot. 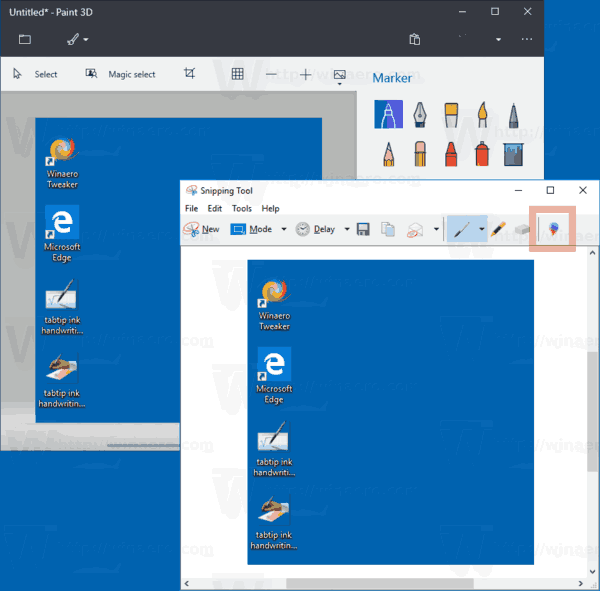 The button appears when you have a captured screenshot open in the app.

The integration between the two apps is very smooth. The screenshot you've taken with Snipping Tool, will be opened in Paint 3D, so you can edit it directly. Once the image opens in Paint 3D, you can move or delete objects from it with Magic select, annotate it, add 3D objects etc.

The purpose of the button is to inform users that Paint 3D is available and can be used instead of classic Paint. As you may already know, the time for classic Paint is running out. The Redmond software giant is about to get rid of the good old Paint app. They promise to move the app to the Microsoft Store, leaving Paint 3D as the only built-in image editor.

The company has already redirected classic Paint to Paint 3D in previous builds, but later the classic Paint application was restored due to an outcry from users. See the following articles for reference:

Also, the recently released Windows 10 Build 17063 comes with a new "Product Alert" button added to Classic Paint itself, which informs users that the classic Paint app is leaving its home for the Store.

Since Paint 3D will be the only image editor of Windows 10, it is actually good to have its button in the Snipping Tool. The Snipping Tool allows performing some basic editing and adding annotations to a screenshot, but when it comes to more complicated actions, an external tool is required. Those who like Paint 3D will benefit from this combo.

What is your opinion on this change? Are you happy with integration of Paint 3D with the Snipping tool? Tell us in the comments.