Recent Windows 10 builds come with a new "Region & Language" page in the Settings app. It completely replaces the classic "Language" applet of Control Panel, which is removed starting with Windows 10 Build 17063. The new page allows users to change the display language, text-to-speech, speech recognition, and handwriting options. Here is how to set the default keyboard layout in Windows 10 because the UI for it has changed.

If you upgraded to a recent Windows 10 release (build 17063 and above), its new language options can look strange to you. Unlike previous releases, it does not include the Language settings UI in the Control Panel. Now you have to use Settings to configure language settings in Windows 10.

As of this writing, Windows 10 Build 17083 is most recent release of the OS. It comes with a number of new pages in Settings which allow the user to set the default keyboard layout.  Here is how it can be done.

To change hotkeys to switch keyboard layout in Windows 10, do the following.

Tip: If you are running the stable version of Windows 10, refer to the following article:

How to configure language settings in Windows 10

The method described in the mentioned article works in all previously released Windows 10 versions and builds prior to Windows 10 Build 17063.

Alternatively, you can use PowerShell to set the default keyboard layout in Windows 10. Here's how it can be done.

For example, the following command will set Russian as my default keyboard layout: 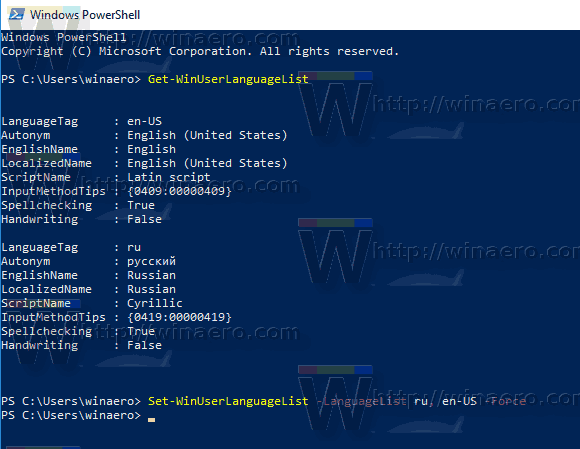