Older Windows versions were able to play a startup sound, a separate logon sound. A sound could also play when Windows logs off or when it shuts down. The user could assign all these sounds from Control Panel -> Sound. Starting with Windows 8, sounds for these events have been eliminated almost entirely. Let's see how to play the shutdown sound in Windows 10.

Note: The startup sound remained in Windows 10 but it is disabled by default. You need to enable it manually if required. See the following article:

In a previous article, I've covered how to play a sound at logon. See

How to Play the Logon Sound in Windows 10

Here are instructions to revive the Shutdown sound. The solution is to simply use the Windows event log system to play the sound.

The Shut Down event

We need to create a task in Task Scheduler attached to a special Shut Down event. The event we need has ID 1074 = User Initiated Shutdown, as shown in the following screenshot. 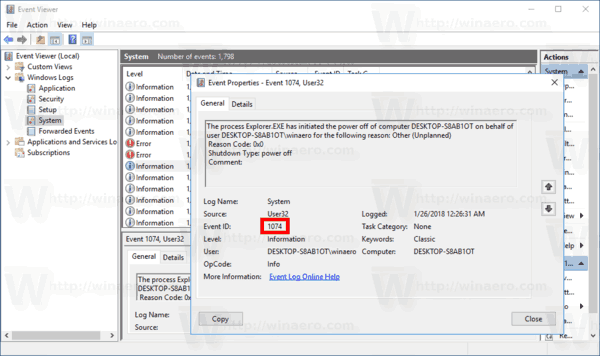 Task Scheduler is able to run tasks attached to any event, so specifying our script as the task's action will make it play the sound every time you shut down the OS. To play the sound, we have to use PowerShell.

Unfortunately, there is no way to bypass these limitations.  The method is very tricky and doesn't work reliable. You've been warned.

Play the Shutdown Sound in Windows 10

This newly assigned sound will play when you shut down the device.  For extra sound files, check out the WinSounds.com web site. It comes with a large collection of sounds for Windows.

Note: I am using the default shutdown sound file which comes with Windows 10. It is short and nice. You can use any WAV file you want. Just provide the correct path in the task.

This trick also applicable to Windows 8 and Windows 8.1.

In the comments, please tell if this method works for you or not. Please specify which Windows 10 version and build number you are running, and if you have the Fast Startup feature disabled or enabled.