Every release of Windows since as far back as I can remember (Windows 3.1) has played a welcome sound at startup. In Windows NT-based systems, there is a startup sound as well as separate logon sound. A sound could also play when Windows logs off or when it shuts down. The user could assign all these sounds from Control Panel -> Sound. Starting with Windows 8, sounds for these events have been eliminated almost entirely. Let's see how to play the logon sound in Windows 10.

Here are instructions to revive the Logon sound. This is a sound that Windows plays when you sign in to your user account. It is a separate sound from the Startup sound mentioned above.

The procedure involves several steps. We need to create a special VBScript file which will play the sound, then create a task in Task Scheduler to play it at logon. Here is how.

Create a VBScript File to play the sound

In this script, I am using the default sound file, C:\Windows\Media\Windows Logon.wav. You can use any file you want. Just modify the appropriate line. 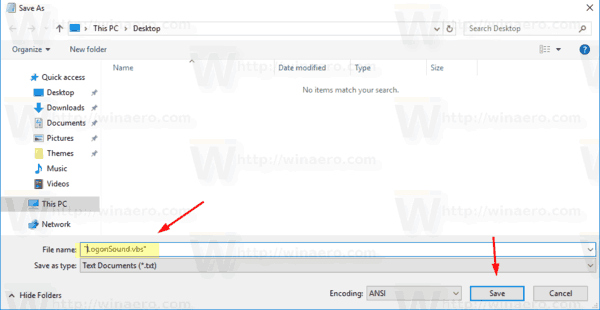 Now we need to create a special Task Scheduler task to play this sound. Task Scheduler is able to run tasks at logon, so specifying our script as the task's action will make it play the sound every time you sign-in.

Play the Logon Sound in Windows 10

This newly assigned sound will play when you log on.  For extra sound files, check out the WinSounds.com web site. It comes with a large collection of sounds for Windows.

Tip: If you are running Windows 8 or Windows 8.1, check out this article.