If you have used Windows 10, you might be already familiar with promoted apps. The operating system installs some "recommended" Universal apps like Candy Crush Soda Saga or Twitter. Microsoft is going to bring more such apps with the upcoming Windows 10 Anniversary Update.

Microsoft decided to increase the number of suggested apps from 5 to 10. This change will reach the end user with Windows 10 Anniversary Update, which is expected to be released in July 2016. When the update will be installed, the Start menu will have up to 10 tiles with promoted apps.

It is interesting that the overall amount of pinned tiles and apps (stock apps that are pinned to the Start Menu by default) will be decreased from 17 to 12. 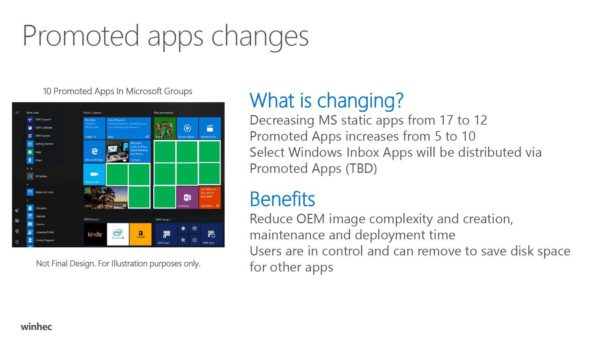 Microsoft is using the "Programmable Tiles" reference for promoted tiles. Designed to look like an app that is already installed on your PC, clicking on one of them will take you to the Store to acquire it. 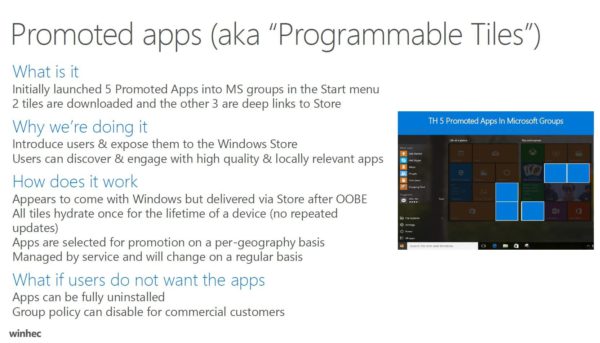 As shown in the image above, some of the promoted apps can be actually pre-installed. In the currently released builds, such apps are Candy Crush and Solitaire Collection.

The user will be able to uninstall those apps and unpin their tiles from the Start Menu. According to slides above, the installation process can be managed using Group Policy as described in the article Fix: Windows 10 installs apps like Candy Crush Soda Saga automatically (via Neowin).