Microsoft recently published an update on the Windows 11 Health Dashboard website, notifying users about issues with some stock apps. According to Microsoft, an expired certificate caused various parts of the operating system and apps to stop working. For example, when opening Snipping Tool, users receive a Windows 8-like notification with the "This app can't open" message. 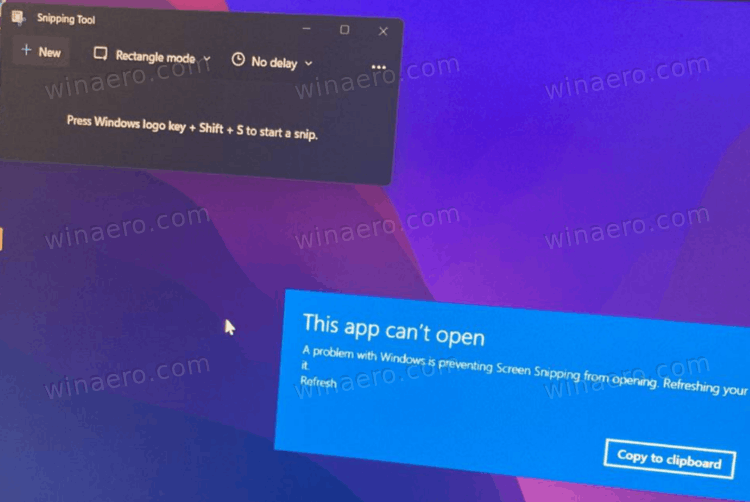 The official documentation says installing the first optional cumulative update for Windows 11 (KB5006746) fixes the problem for some apps, but not the Snipping Tool. Many users, including us at Winaero, cannot open Snipping Tool and other affected parts of Windows 11, even after installing KB5006746.

Now Microsoft has another patch to solve the issue. The bad news is that that update is available to Windows Insiders in the Beta and Release Preview channels only.

KB5008295 is now available to Windows Insiders with a fix for broken Snipping Tool, Touch Keyboard, Voice Typing, Emoji Panel, IME UI, and the Getting Started and Tips apps. The patch also fixes a known issue when S-mode users cannot open the Start menu and the Settings app.

"We fixed a known issue that might prevent some users from opening or using certain built-in Windows apps or parts of some built-in apps. This issue occurs because of a Microsoft digital certificate that expired on October 31, 2021.

We fixed a known issue that prevents the Start menu and Settings app from opening as expected (S-mode only)."

You can get KB5008295 via Windows Update. Microsoft notes that the update does not change Windows 11 build number in the Settings > System > About section and the winver window. To check whether your system has successfully installed the update, go to Settings > Windows Update > Update History. Make sure the list of installed updates contains KB5008295.

Microsoft does not say when users in the stable channel can expect KB5008295 to arrive. Perhaps, the company will include the necessary fixes in the next "Patch Tuesday" update, which lands on November 9, 2021.