If you have been following Winaero regularly, you might be familiar with a new floating Cortana feature available in recent Windows 10 builds. Reportedly, a new UI for the taskbar flyout of Cortana is coming to the OS.

The new UI features a revamped look of the Notebook portion of the Cortana flyout. The new Notebook looks fancy, compared to the currently available list-style UI. 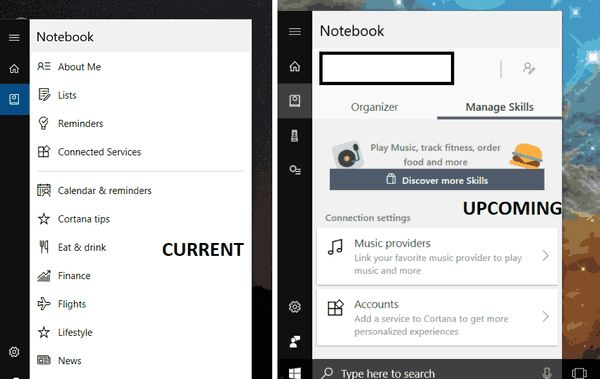 It will be possible to integrate music apps like Spotify with Cortana and stream music directly using it. It is definitely a nice addition for those who use Cortana as their digital assistant.

The update hasn't been announced officially yet. The official announcement should reveal what the "Skills" feature is all about and how the rest of the new features work.

Do you like the changes made to Cortana? Tell us in the comments.