A few days ago, Microsoft has released Windows 10 version 2004 (20H1) to the stable branch.  Its build number is 19041. Meanwhile, Insiders in the Fast Ring are on build 19635, which represents Windows 10 version 20H2 'Manganese'. Now, the first version number for the Windows 10 21H1 is spotted by enthusiasts.

As you can see in the screenshot below, Microsoft has done a version number jump to 10.0.201xx. Builds are not yet available in the rs_prerelease branch used to ship updates for Insiders. So, it is not yet possible to say when we will see them in the Fast Ring. Probably this will happen after prerelease builds of Windows 10 '20H2', a small service pack-like update for version 2004, reach the Slow ring. 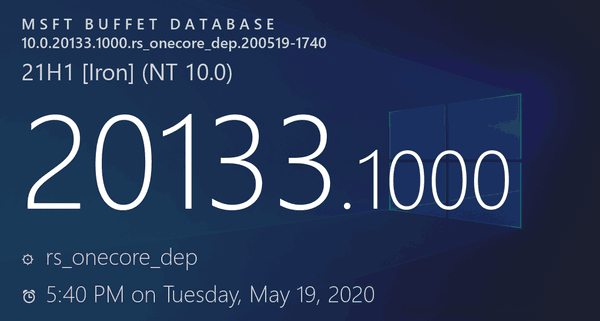 The spotted build number is 20133.1000 (21H1 [Iron]) from the internal rs_onecore_dep branch, and it is not available for download. But this will change soon.