We have come to know that the Microsoft Edge browser, a Universal app intended to replace Internet Explorer in Windows 10, has partial extension support included in build 11082. Although the feature is broken, it is interesting that Microsoft finally started implementing it.

Extensions are a must-have feature for any modern browser. Every mainstream browser supports them except Edge. Microsoft Edge began as a barebones browser with no features whatsoever and no extension support. This was a huge disappointment for even those users who prefer a simplified UI. Due to this, it is hard to recommend Edge to anyone for general browsing. It is missing 99% of the features that the feature-rich Internet Explorer has.

Microsoft has finally decided to change things and add the much requested extension support. In Windows 10 build 11082, Edge has some code to support browser extensions. It has some references in the Registry and its DLL files. The Extension pane can be enabled but is not functional: 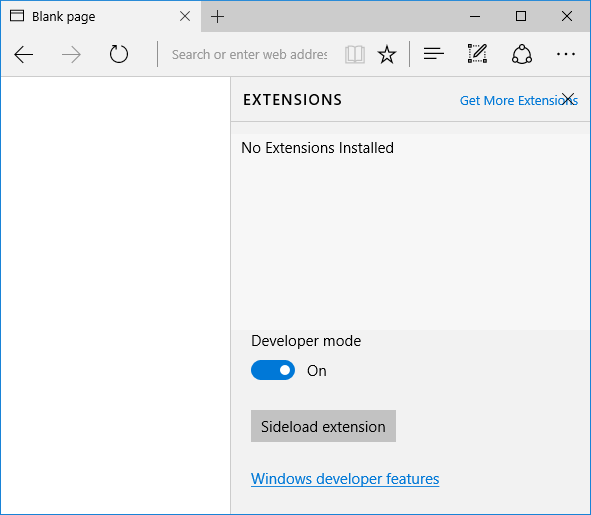 There is no way to get it to work. Credits for this discovery go to WalkingCat.

It is not news actually that Edge will have extensions support. Earlier, Microsoft had announced that extensions will be in Edge but won't be supported in Windows 10 RTM.

Will you use the Edge browser if it gets extensions? Or are you already using it? Tell us in the comments. Personally I use Mozilla Firefox because it is feature-rich, cross-platform, supports extensions and has a great deal of customization.