Microsoft is no longer supporting Internet Explorer 11 on Windows 7. This means that the browser will not receive updates, even for critical vulnerabilities. IE11 is superseded by Microsoft Edge Chromium, which is available for Windows 7 as well. 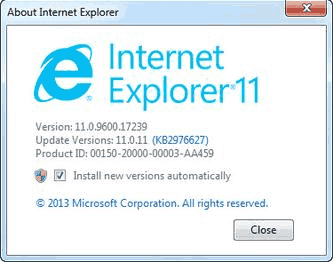 Internet Explorer 11 is a web browser that comes bundled with many Windows versions. In Windows 10, Microsoft recommends and promotes a new browser called "Edge". The Edge browser is a Universal app. Some users who like Microsoft's browsers prefer to stay with the good, old Internet Explorer, which is a native Win32 app.

Internet Explorer saw the last major update with Windows 10 Build 16362, where it got a separate search box next to the address bar.

A few days ago Microsoft has updated the download page for IE11 for Windows 7. The updated page states that the browser is no longer supported.

Though it's no longer supported, you can download and install Internet Explorer 11.

Windows 7 SP1 has reached its end of support on January 14, 2020. Mainstream support for Windows 7 ended back in 2015. Since that time the OS hasn't received any new feature. The OS can be considered classic software and it is widely used by users all over the world.

The Redmond software giant may support Edge on Windows 7 by following Chrome's support schedule. As you may remember,  Google promised to support the retired OS for at least 18 months, until July 15th 2021.

If you are still using Windows 7, switching to Chrome, Edge or Firefox is a good idea. IE11 remains in use mostly among enterprise customers.