File shortcuts have been in Windows since Windows 95. In case you don't know what shortcuts are, they are merely a link to another file or folder on your hard drive's file system or to some system object. The object that they link to is called the target. Shortcut files have the extension .LNK but it is always hidden by the Explorer shell using the 'NeverShowExt' registry value. Shortcut files can be placed anywhere - on your Desktop or pinned to your taskbar or Quick launch but the most number of shortcuts are located in your Start Menu folder. Today, we will see how we can turn on the display of more details about these shortcuts which the Explorer shell hides.

In Windows 8.1 and Windows 8, even if the Start screen has replaced the Start menu, the tiles that you see on the Start screen are all shortcuts. Shortcuts are stored in the two Start menu folders, one at %AppData%\Microsoft\Windows\Start Menu\Programs, which stores shortcuts unique to each user account and the other at %ProgramData%\Microsoft\Windows\Start Menu\Programs, which is common for all user accounts. The best way to identify a shortcut is to simply observe its icon for a tiny overlay arrow. If the item is not a shortcut, it won't have an overlay arrow. You can also easily change or remove this overlay arrow icon using Winaero Shortcut Arrow Editor.

When you point towards a shortcut, you get a tooltip (also known as an infotip) showing the comment property. The comment and such other related properties are usually stored on the file system or inside the shortcut file (such as the target command line, shortcut hotkey, target type, icon, info on whether to run the shortcut as admin and other information). This is all quite useful information.

Explorer showing the tooltip for an item

Starting with Windows 7, some shortcuts also store the AppUserModelID property. Application User Model IDs, or simply AppIDs, may be directly used to launch their respective target applications. Shortcuts with the AppUserModelID property are used by some desktop programs too and all Windows 8 Modern apps for launching. In fact, we showed you previously, how to start a Modern app from the desktop using AppIDs without going to the Metro Start Screen. So AppIDs are yet another property stored inside a shortcut file. 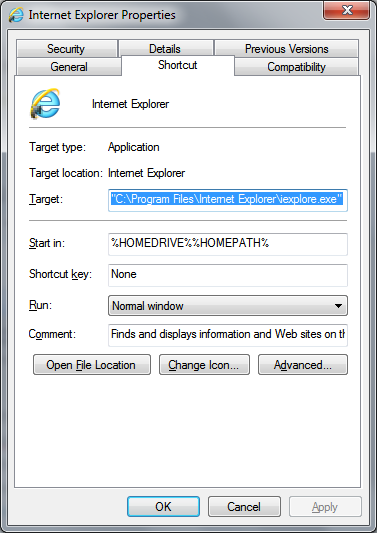 Starting with Windows 95, you could right click an object to see its properties or hover over an item to see the properties inside a tooltip. In Windows 2000 and XP, you could also see the Properties in the Details and Tiles views of Windows Explorer. In Windows Vista, Microsoft expanded the system of reading and writing properties from the Explorer shell and added various new ways to display those properties. In Windows Vista and later, these Properties are shown in other places in the Windows user interface such as the Explorer Details Pane, in Explorer content views, in file operation prompts and copy conflict prompts. They are also shown on the Details tab which is new to Windows Vista.

These properties as mentioned above can be file system related or some metadata stored inside the file itself. To read the properties stored inside a file, Windows ships with several property handlers, a kind of Explorer shell extension new to Vista. Property handlers ship with Windows for documents, images, music, video files as well as for shortcuts, EXEs, fonts, URL favorites, MSI (Windows Installer) files and email messages. The details which we mentioned above about shortcuts are all stored inside the shortcut file (.LNK).

Now since shortcuts store so much information, wouldn't it be nice if these properties such as the target command line, the location where the shortcut is stored, and AppID were also shown in the Start menu and Explorer? Despite having many useful properties stored in the shortcut, Windows only shows the comment in the tooltip, a feature which was introduced in Windows 2000 and hasn't changed since. Well, the good news is that the Windows Registry allows fully customizing which properties are displayed where. So with a bit of registry tweaking, you can see a lot more properties about files which have property handlers installed.

Since we are concerned with showing more shortcut-related properties, the registry key where shortcut properties which the Explorer shell does is:

Winaero has prepared a ready-to-use registry file that automatically adds more properties to show at this Registry key. Download the ZIP file below containing the REG and double click to merge it. Now your shortcuts in the Start Menu on both Windows 8.1/8 and Windows 7, as well as the ones from Quick Launch will show more details in their tooltips besides the comment, such as the link target and the folder path. If the shortcut contains an AppID, that will be shown as well on Windows 8. You will also be able to see these additional shortcut properties in Explorer's Details pane too, and the Details tab in the full Properties. 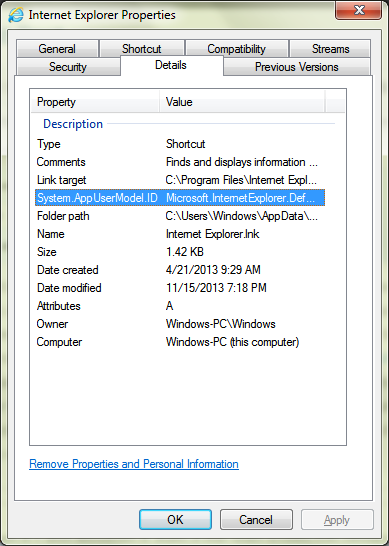 If you use a Start Menu replacement such as Classic Shell on Windows 8.1/8, you can also see these detailed tooltips on these systems when you hover over an item. Pretty cool, huh? :) You can copy the AppID for a Modern app's shortcut from the Details tab in full Properties should you need it.

7 thoughts on “How to show more details for shortcuts in Windows 8.1, Windows 8 and Windows 7”