If you find the default Windows 8.1 shortcut icon too large and ugly, or are bored with that blue arrow overlay, then you might want to change it or disable it completely.  It's easy to do that. I have developed a tool for you to change the shortcut arrow with just one click! It's unfortunate that Windows 8.1 has no settings for this. In the past, we had TweakUI for Windows which allowed changing it. Well, let's fix it for Windows 8.1 right now!

Windows Shortcut Arrow Editor is my freeware which allows you to remove the shortcut arrow with one click. 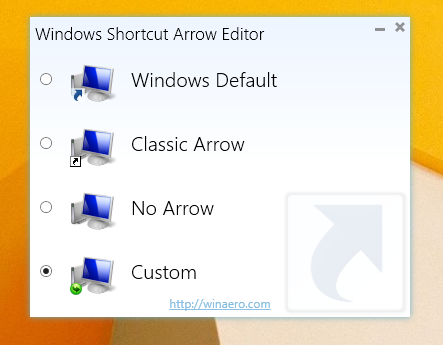 It also provides you an option to load a custom icon to be used as the shortcut overlay. In my screenshot above, you see a nice green arrow which I use personally.

With Windows Shortcut Arrow Editor you are able

Windows Shortcut Arrow Editor is a portable application and does not require to be installed. It supports the following Windows versions:

You are here: Home » Windows 8.1 » How to remove the shortcut arrow in Windows 8.1 or replace it with a custom icon

2 thoughts on “How to remove the shortcut arrow in Windows 8.1 or replace it with a custom icon”