Ever since Windows 8, Microsoft has shipped a set of Modern apps with the OS which are not really suitable for use with the mouse and keyboard. When you first sign in, Windows installs those apps for your user account. Windows 10, the successor to Windows 8 and Windows 8.1, comes with Universal apps bundled as well. Also, even if you uninstall them from your user account, many of them keep coming back as the OS gets updated and they are copied again to your user account from the system account. If you have no use for Modern apps, here is how to remove all bundled apps in Windows 10.

In Windows 8, Microsoft offered Modern/Metro apps and slowly started phasing out development of classic desktop apps. For example, you could use a Modern app to view images, but you could still continue to use the classic desktop version of Photo Viewer. It was the same situation for Windows Media Player which got replaced by Music and Video apps and so on. For some other cases, Microsoft left no classic alternative. Games and Windows Mail etc were removed completely and their place was taken by Modern apps only. In Windows 10, more classic apps are removed. For example, the Calculator app is removed and even the classic Personalization window is replaced with the new Settings app.
Universal/Modern apps are still suitable only for touch screen devices because they use WinRT controls which were designed with touch in mind. Putting Metro apps inside a window does not mean they are as usable as desktop apps for mouse and keyboard since the desktop apps use Win32 controls. There are plenty of users who are never going to use Modern apps. Thankfully, it is possible to delete most bundled Modern apps from Windows 10 and save a ton of disk space. Here is how it can be done.

This can be done using the command line tool, PowerShell. To open PowerShell, open the Start menu (press Win key on the keyboard) and type Powershell. When it comes up in the search results, right click on it and choose "Run as administrator". Or you can also press Ctrl + Shift + Enter to open it as administrator. Opening PowerShell as administrator is important, otherwise, the commands you run will fail. 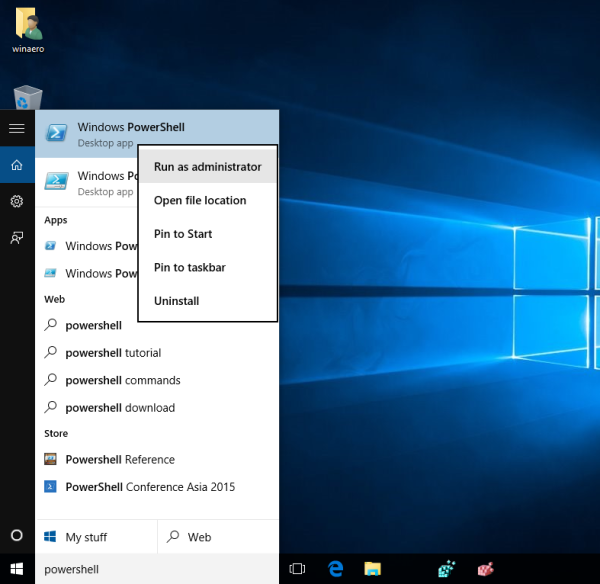 Type the following command to remove all Modern apps from your current user accountstrong>:

Here's yet another command you may find useful. Use it to remove all Metro apps from a specific user account. It's quite similar to the command above, just add -User username part. Substitute the user name of the account for which you wish to remove Modern apps in the command line in place of <username>.

Finally, here's a command that will remove Metro apps for all user accounts:

This command will make sure that Modern apps don't keep coming back to your user account even after you uninstalled them.

That's it! Note that in Windows 10, the Store app can be uninstalled. See How to restore Windows Store in Windows 10 after removing it with PowerShell. Also, some apps cannot be uninstalled like the Contact Support app, Cortana, Photos, Microsoft Edge, Windows Feedback app and of course the Settings app. Also, the Store app made its way back to my system via some update.