Mozilla has announced a new kind of ads for the Firefox browser. This new feature is called "Suggested Tiles" and will show you special tiles of recommended sites based on your activity (browsing history) and interests. Mozilla claims that the feature will be rolled out to Firefox Beta 39. If you are not happy to see such tiles in your Firefox browser, it is possible to get rid of them. In this article we will see how to disable suggested tiles in Firefox.


Mozilla says they are doing everything possible to make sure the end user does not confuse promoted content with his bookmarks, so it will be easy to tell which tiles are promoted or suggested. Here is what they say:

We believe users should be able easily to understand what content is promoted, who it is from and why they are seeing it. It is the user who owns the profile: only a Firefox user can edit their own browsing history. And for users who do not want to see Suggested Tiles, opting out only takes two clicks from the New Tab page, without having to read a lot of instructions. To deliver Suggested Tiles we do not retain or share personal data, nor are we using cookies.

Here is how Suggested Tiles will look in the release version: 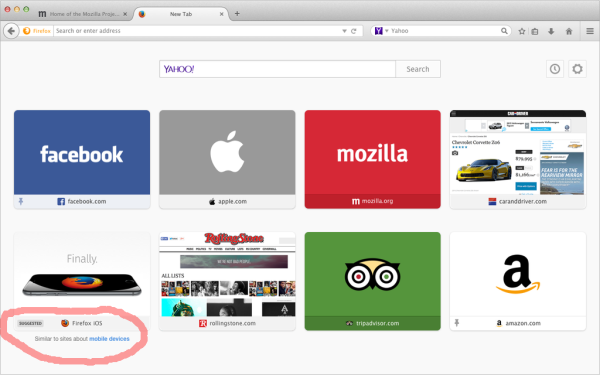 To disable suggested tiles, the following option will be added to the New Tab page controls in the Firefox browser: 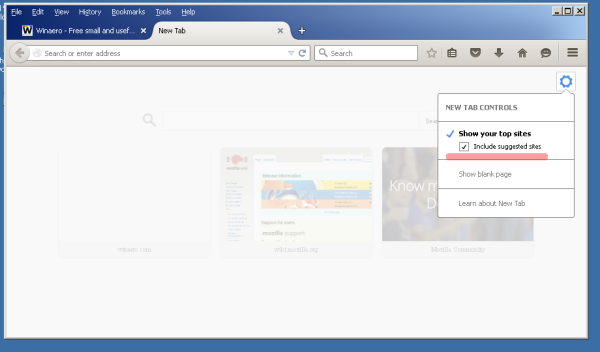 Untick the "Include suggested sites" option to disable suggested tiles in Firefox completely and you are done.

This feature is already available in Firefox Nightly, so interested users can try it right now.

It is worth mentioning that Suggested Tiles will not work for users who have enabled the Do Not Track feature in Firefox preferences. Once you enable it, Firefox will not track your activity and won't suggest you any site.

What do you think about this move from Mozilla? Personally, I am not happy to see these changes happening to Firefox because many users never bother to change the defaults. Firefox has over the years added ads, suggestions and is losing features or customization with every major release. If this trend continues, it is quite possible that Firefox users will switch to an alternative fork of this open source browser or even to another browser entirely. Already, Firefox usage is shrinking according to websites which track browser share (via Mozilla).

One thought on “How to disable suggested tiles in Firefox”