You can add Task Manager to the Desktop context menu, so it will be accessible when you right-click your desktop background. While this trick works in all Windows versions, it can be specially useful for Windows 11 users.

Task Manager is essential tool that is available in all modern Windows versions. Task Manager shows all the running apps, including user apps, background processes, Windows services, and more.

In the current form, the Task Manager was first introduced in Windows 8. Starting in Windows 10, it allows you to monitor your GPU temperature.

While it is not hard to start the app using the Ctrl + Shift + Esc shortcut and then pin it to the taskbar, you may find it useful to add it to the Desktop context menu. 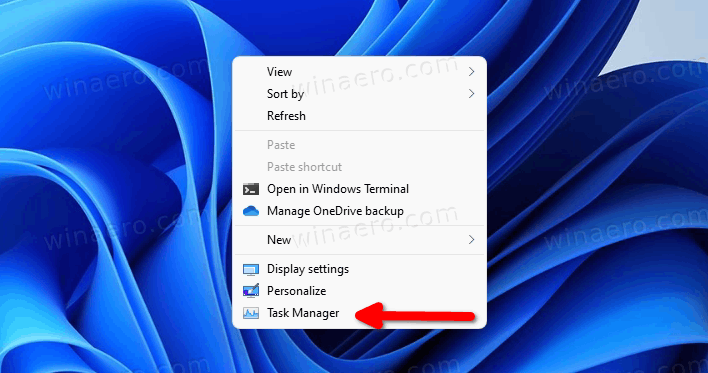 This post will show you how to add the Task Manager app to the right-click menu of the Desktop background.

Done! Now, if you right-click the Desktop, you will see a new Task Manager entry.

If you are using Windows 11, it shows a shorten menu by default, so you may need to click Show more options to get the rest items visible, including the newly added Task Manager command.

Finally, to undo the change, use the included Remove Task Manager from Desktop context menu.reg. Once you double-click it and merge, it will remove the app from the right-click menu of your desktop wallpaper.