Windows 10 is the first version of Windows which includes the virtual desktops feature natively, so there's no need to use any third party app for basic virtual desktops functionality. In Windows 10, this feature is called "Task View". The user can manage windows and apps between virtual desktops using a special button on the taskbar. However, the keyboard is another more effective and productive alternative to the mouse. You can save a lot of time by managing virtual desktops with hotkeys. Here is a list of hotkeys which can be used with Task View in Windows 10. 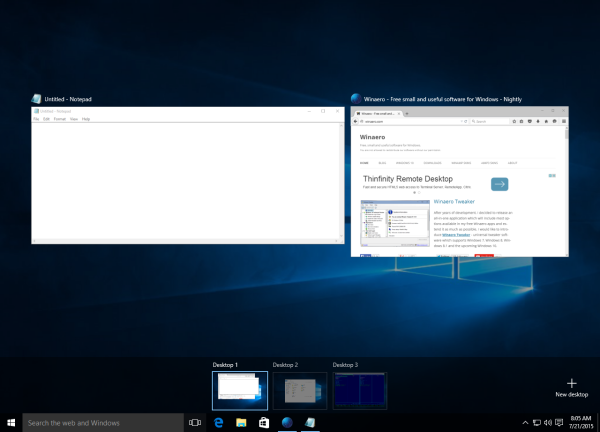 The virtual desktops feature is nothing new to operating systems and not even exclusive to Windows 10. The ability to have multiple desktops exists in Windows since Windows 2000 at the API level. Several third party apps have used those APIs to provide virtual desktops. But finally in Windows 10, this feature got implemented in a user-friendly form for the end user. Microsoft has assigned the following hotkeys to manage virtual desktops:

That's it. Using these hotkeys, you can manage your virtual desktops in Windows 10 more productively.