Ghostery is one of the most popular extensions to block trackers on the Internet. While a lot of extensions like ad-blockers provide the same functionality, Ghostery sometimes does it better than others because it is its primary function.

Ghostery is available for all popular browsers like Chrome, Opera, Firefox and Internet Explorer. Recently, it became available for Microsoft Edge.

Microsoft Edge is the new default web browser in Windows 10. It is the successor to Internet Explorer 11. According to Microsoft, Edge has better web standards support, is lighter on system resources, more power efficient and is faster at rendering thanks to the new engine which has no legacy code under the hood. 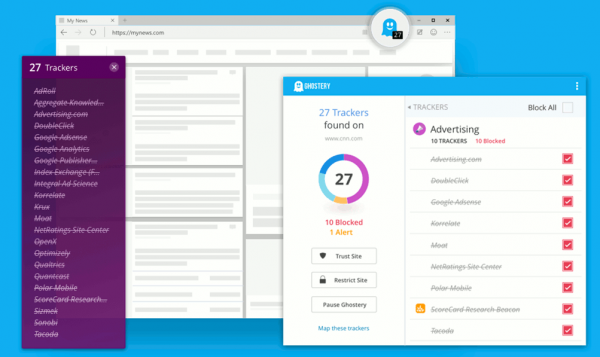 It is great to see that Ghostery has been released for Edge. You can quickly check it out by installing it from the Windows Store.

Here is a quick link for you:

Get Ghostery Extension for Microsoft Edge

Do you use extensions in Edge? What are your favorite extensions? Tell us in the comments.

6 thoughts on “Get Ghostery Extension for Microsoft Edge”