Windows Subsystem for Linux (WSL) is a feature of Windows 10 that is intended to be helpful for developers, mostly web developers, who can run native Linux daemons and binaries in a familiar environment. No virtual machines, and no remote servers are required when you have the Windows Subsystem for Linux enabled. Developers who prefer Windows 10 over alternative operating systems and over previous Windows versions are probably happy to have this tool in their arsenal. Initially, it supported only a single Linux distro - Ubuntu. Starting in Fall Creators Update, the user is be able to install other distros like the SUSE Linux family from the Microsoft Store.

As spotted by Windows Latest, users of two mentioned Windows 10 versions are getting “Element not found” error when trying to run WSL. Others report general installation issues.

One of the reports says

After the KB4571756, I also got this error. I deleted the docker folders in AppData, then uninstalled and reinstalled docker but it didn’t fix. It finally worked when I uninstalled the latest windows quality updates. (docker is associated with WSL in this case 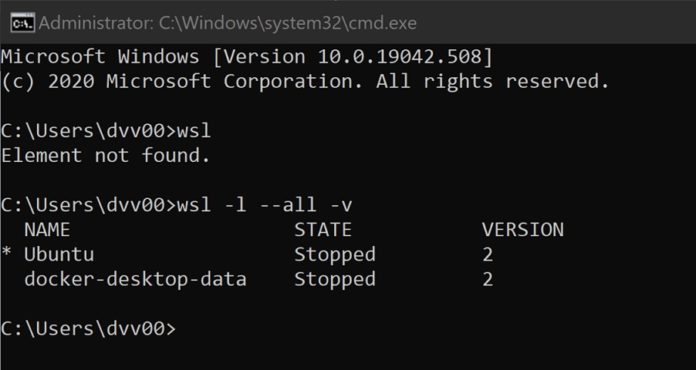 To resolve the issue, users remove the update. However, the issue is not yet confirmed by Microsoft. If you are affected, do the following.

To fix WSL Element not found after installing KB4571756 in Windows 10,

If you still have issues with WSL, you can try to reinstall the Linux distro that you have installed.