As you may already know, Firefox 44 and above won't allow you to run unsigned add-ons. Mozilla developers decided to remove the ability to disable the signature enforcement, which can still be disabled in Firefox 43. However, it was announced that the stable branch of Firefox will get a new option which will allow the user to temporarily load unsigned extensions.

At the moment of this writing, the mentioned feature has already landed in Firefox Nightly v46. To try it out, you need to install Firefox Nightly and then visit the new about: page by entering the following text in the address bar: 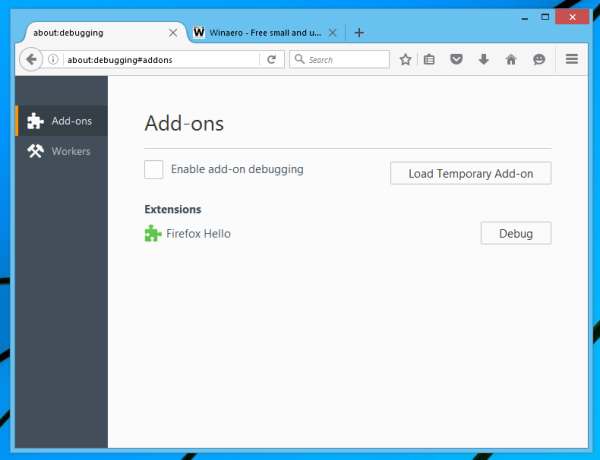 For users who really need to use an unsigned add-on on a regular basis, this new workaround is definitely not an acceptable solution. Some add-ons require you to restart Firefox, so such extensions will not work via this feature. Only add-on developers might find this feature useful to debug and test their add-ons. This is the exact purpose for the inclusion of this feature.

It is not clear why Mozilla refuses to keep the xpinstall.signatures.required flag, so that both, users as well as developers will be satisfied. In any case, such a feature is better than not having the ability to run unsigned add-ons at all. It will become the only way to run an unsigned extension in upcoming Firefox releases. What do you think about this new option? Do you welcome this change?

2 thoughts on “Firefox will get Load Temporary add-ons feature”