Yesterday, Mozilla rolled out an updated version of its Firefox browser. Mozilla Firefox 41 is available for all supported platforms. In this article, I would like to mention all the major changes available in this release. 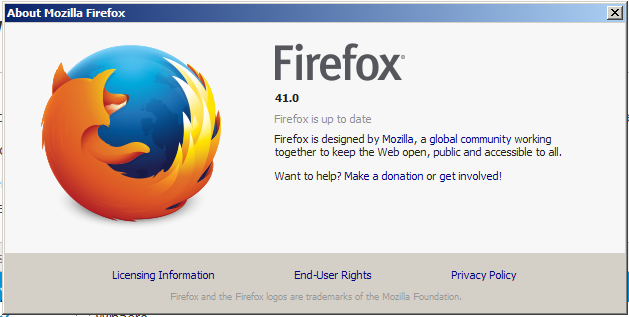 Besides Firefox getting updated to version 41, the entire family of Mozilla products also got updated. It includes Firefox 38.3.0 ESR, Thunderbird 38.0.3 and the all-in-one suite SeaMonkey 2.38.

For the end user, the following changes are most notable in Firefox 41:

However, AdBlock users might be a bit disappointed, because the changes that Mozilla implemented to reduce memory usage of ad blocking extensions in the beta stage of Firefox 41 were not included in the release version. So the AdBlock extension will continue to cause heavy memory usage in this version.

Besides these changes, about 20 security flaws were fixed and 4 of them were considered "critical". This is good news for all Firefox users.

The browser should be updated automatically on your computer. If this does not happen, check out the following article: Fix Firefox does not update itself automatically.