Yesterday, Mozilla rolled out a new version of the Firefox browser, which features notable changes yet again and can be considered as a major release. Let's see what the changes are.


If you are running Windows 10, then the difference in Firefox's appearance will be more obvious. Its appearance has changed to look more polished under Windows 10. 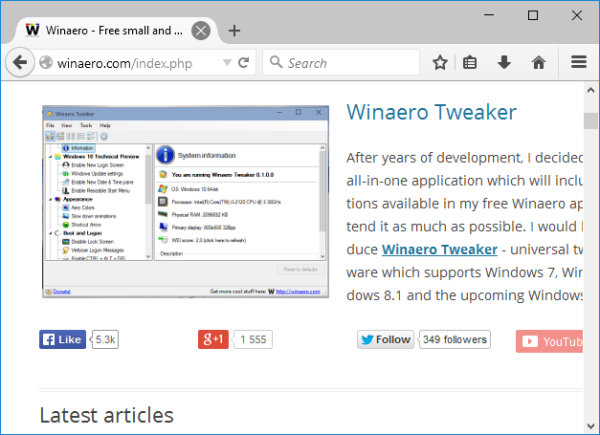 The window frame of Firefox is grey on Windows 10, and its tab close button is much bigger now. Also, the font in the address bar is slightly larger than in the previous version.

This change might be welcomed by Windows 10 users as the gray title bar of Firefox looks better than the white window frame of Firefox 39. It makes the browser look more usable with the default Windows 10 theme. However, if you have enabled Aero Lite or the colored title bars theme, you will lose the ability to see a colorized frame of Firefox's window. This can be considered as a step back by many users. A number of Windows 10 users are using Aero Lite because they cannot stand the white title bars.

Besides this change, Firefox 40 drops support for the Dark theme. 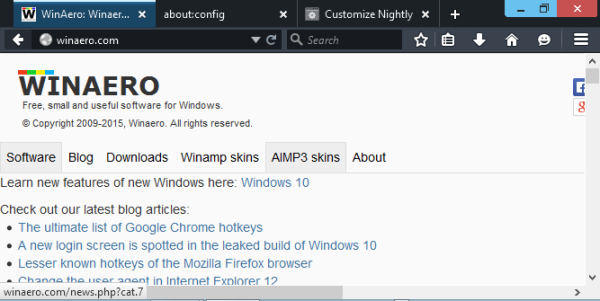 It is not possible any more to enable the black/developer theme in the stable channel of the browser. Developers said that this feature caused issues with synchronization, so they removed it from the stable release channel.

The other notable changes in Firefox 40 are as follows:

That's it. Do you like the changes happening to Firefox? What is your default browser these days?