Microsoft has updated the Edge Dev channel with a new feature, the new Download UI, which was earlier available to select small group of Insiders. Now, starting in build 87.0.629.0 and above, Edge can ask users if they want to Open, Save As, Save, or Cancel a download. This is also available in the Canary channel.

Here's how the previous implementation of the download pane looks. 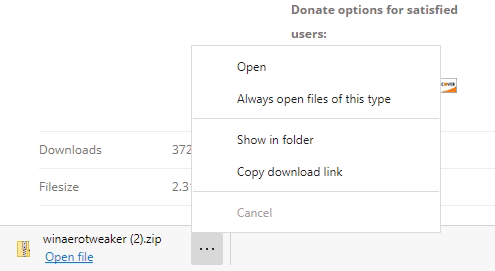 The updated one looks a bit different, showing extra buttons in the pane. The user can directly choose 'Save as', 'Save', 'Open' as the download option. Some options are hidden behind the three dot button menu.

The new UI can be enabled or disabled in Edge settings. To enable it, navigate to edge://settings/downloads and toggle on, "Ask me what to do with each download." Once you download a file after enabling that setting, you will see options to:

Finally, Edge allows deleting the downloaded files directly. You can now right-click on a downloaded item (or the ... menu for the item in the download shelf/bar) and select "Delete file." Once you do this, the file will be deleted from your computer.

Here's the full list of changes in today's Dev build.