As you may already know, a new Share UI is implemented in Windows 10 Creators Update. It is available in the operating system starting with build 14971. It is known that besides installed apps, the new Share flyout shows promotions from other apps in the Store. If you are not happy to see them, here is how to disable suggested apps in the Share pane of Windows 10.

Windows 10 is known for promoting some Store apps in the Start menu and also on the Lock screen. Windows 10 Creators Update takes these promotions to the next level. Now, recommended apps can be displayed in the Share pane. When you share a file from Explorer, an image from the Photos app or some other content from an installed app, the Share pane may look like this: 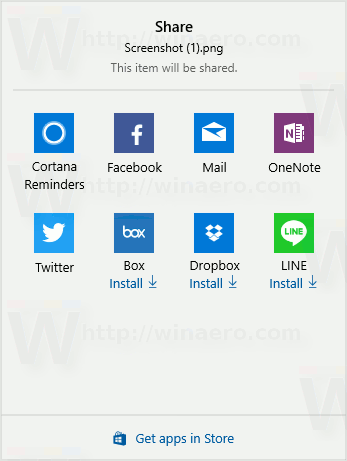 In the screenshot above, you can see apps like Box, Dropbox, LINE. These apps are not installed in my Windows 10, but will be installed once I click the suggestion in the Share pane. 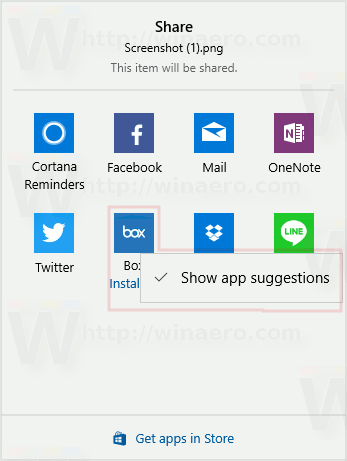 There, untick the item Show app suggestions. This will disable suggested apps in the Share pane. It won't show extra icons any more: 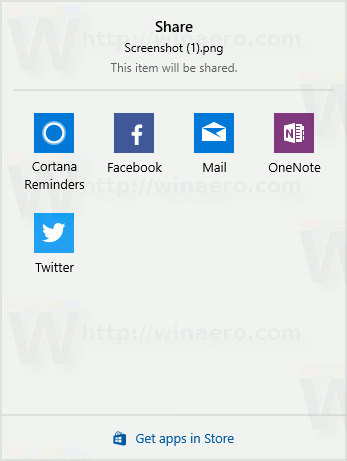 The Share pane is part of the new Share user interface Microsoft added for Windows 10 Creators Update. Before Creators Update, Windows 10 had a Share UI similar to Windows 8 and Windows 8.1. The company decided to revamp it and make it fit the overall appearance of the rest of the operating system. The previous Share pane was styled to match the Metro user interface of Windows 8, which was partially eliminated from Windows 10. Instead of the full screen experience, Windows 10 is using adaptive controls so apps look native like traditional programs on Desktop PCs. The new Share flyout follows this idea perfectly.