In Windows 10 build 18298, are a number of changes were made to the built-in console subsystem of the operating system. There is a new "terminal" tab in console option that allows adjusting several new options for the Command Prompt, PowerShell, and WSL. One of them is the ability to change the cursor color.

Windows Console subsystem is utilized by certain built-in apps of Windows 10, including the Command Prompt, PowerShell, and WSL. In Windows 10 Build 18298, which represents the upcoming 19H1 feature update, also known as version 1903, you will find a set of new options of the console.

These settings are "experimental", because in certain scenarios, it's possible that they might not behave like you would expect them to, may not make it into the next OS release, and may change completely in the final version of the OS.

One of the is the color of the cursor. The default cursor color of a console window is the calculated inverse of the background color. The user can set it to a custom color of his choice.

It will be set for the specific shortcut you used to open a console instance. E.g. if you have multiple command prompt shortcuts, you can set the desired cursor color for each of them individually. This way, PowerShell, WSL, and the command prompt may have their own independent settings.

To change the cursor color in the console in Windows 10,

In the color dialog, select the desired color using the provided controls. Now, note the values in Red:, Green:, and Blue: boxes. 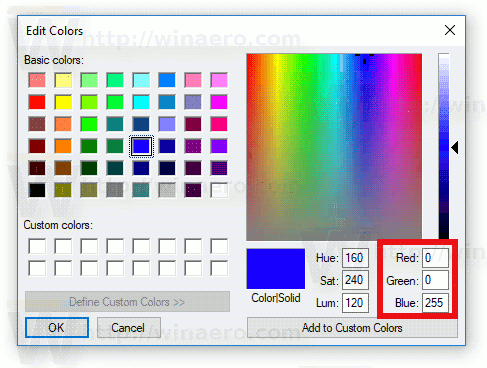 You are done! You can get something like this:

Tip: With Windows 10, Microsoft added an ability to have a semi-transparent console window for cmd.exe, and PowerShell. It's a lesser known feature that you can change the transparency level on the fly for the current window with hotkeys. See