As you may already know, Microsoft is working to make Action Center in Windows 10 more useful. Windows 10 Redstone, the upcoming major update to the operating system, will bring notable changes to many parts of the OS and its features. Some of the changes anticipated in Redstone wave 2 might actually end up shipping in Redstone wave 1 although nothing is officially announced yet. It has come to our knowledge that Microsoft is working on bringing a Card UI to Action Center and Cortana.


Some images have appeared on the Internet which show a card-style UI in action. After tiles in the Start menu, cards is what Microsoft wants to implement in Action Center and Cortana. The card type UI is already present in Android's Google Now feature so it looks like the idea was inspired by that.

The Card UI is a way to represent the information collected from various sources: app notifications, Calendar reminders, or, in case of Cortana, it might be a search result performed by a user request which can include the information and images collected over the Internet. Each Card will have a set of quick actions which the user can perform immediately from the notification toast: to reply to a message, to write a email, to open Maps or to make a call. 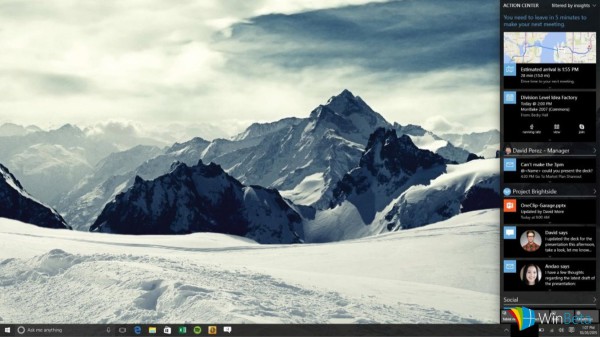 The Card UI will query and fetch information from your personal data such as calendar appointments so users will not miss important business or personal events.

Third party apps might also be able to create Card UI notifications, showing important information and quick actions based on each individual app. So, Calendar will be able to show birthday reminder cards inside the Action Center.

Note that images showed above are internal design concepts, so the final implementation can be completely different or even canceled by Microsoft. None of these features have been confirmed by Microsoft. In any case, more cloud-powered features are going to be added to Action Center and Cortana that make finding information easier (via Winbeta).

The upcoming //build/ conference will shed light on these changes soon. What do you think about these concepts? Do you welcome them or do you think that this does not add much value to Windows 10? Let us know in the comments.