Vivaldi was started with the promise of giving you a highly customizable, full-featured, innovative browser. It looks like its developers kept their promise - there is no other browser on the market which offers the same amount of options and features. While Vivaldi is built on Chrome's engine, power users are the target user base, like the classic Opera 12 browser. Vivaldi was created by former Opera co-founder and developed keeping in mind Opera's usability and power.

These day, Vivaldi is the most feature rich, innovative web browser among Chromium-based projects.

Vivaldi now uses Chrome's user agent string and doesn't reveal its version to web sites. According to devs, their competitors used to block Vivaldi by its user agent value, making the user switch the browser.

Being a Chromium-based browser, Vivaldi should work on any website that works on Chrome. Yet, we have faced the issue of “incompatible websites” far too often.

This is because many websites that work perfectly in Vivaldi, actively block us when we “announce” our true name. Vivaldi is often blocked by competitors, rivals and tech companies in positions of power.  Blocking browsers has no technical merit in 2019, nor has it ever had.

Our users regularly encounter messages that they have to upgrade their browser or the site will not work. Although we have made workarounds for a few of these issues, this is happening on too many sites and some are hard to fix.

By now, Vivaldi reveals its true user agent line to only a few web sites, including duckduckgo.com, ecosia.org/com, qwant.com, startpage.com and vivaldi.com.

Vivaldi extends this functionality with the native dark theme support, which now works on Windows and macOS. There is a new option that can be enabled under Settings → Themes → Scheduled Themes → Use Operating System Theme. 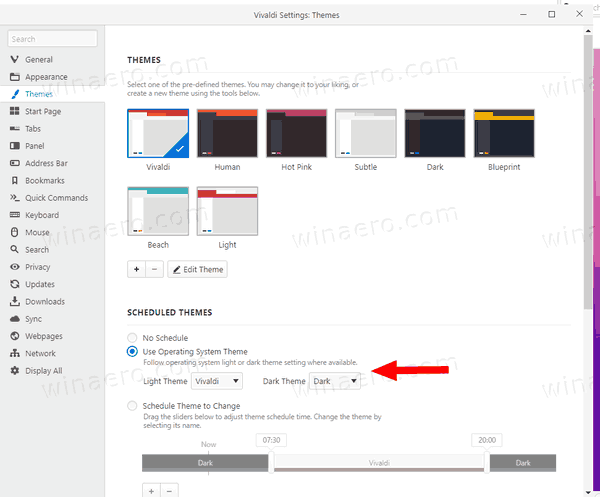 There, you can specify which theme Vivaldi should use with the Light OS theme, and which theme should be used when dark mode is active in the OS.

Here's how it looks in action: