According to Microsoft's own tests, at least, Edge in Windows 10 Creators Update has the best battery life compared to other popular browsers — Chrome and Firefox. The company had done the same testing earlier, but yesterday Microsoft published an updated video comparison of how long you could use your device using different browsers. The scenario stays the same: all three Surface Books used in this video are configured identically, not plugged in and were running the same OS version, showing the same video content in the browser. 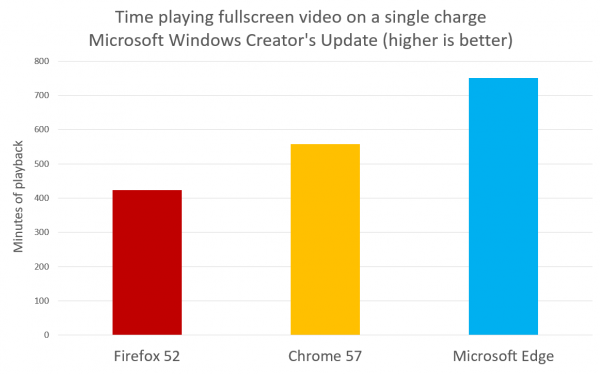 Of course, for the duration of the test, Microsoft disabled some system features to get the best possible battery life from all devices and prevent anything from sabotaging it: for example, the Windows Update service and location tracking was disabled, as well as Bluetooth and ambient light sensors.

All the details of the test can be found on the special GitHub page, where the company has described the hardware specifications of the PCs, their browser versions and the changes made to the OS.

You are here: Home » Windows 10 » Microsoft Edge has the best battery usage in Windows 10 Creators Update