Microsoft has updated Sticky Notes for Windows 10. It is a Universal (UWP) app which debuted in Windows 10 Anniversary Update and comes with a number of features which the classic desktop app didn't have.

Sticky Notes for Windows 10 lets you create Cortana reminders from your notes. You can type a phone number and have it recognize it, and recognize URLs too which you can open in Edge. You can create check lists and use it with Windows Ink. 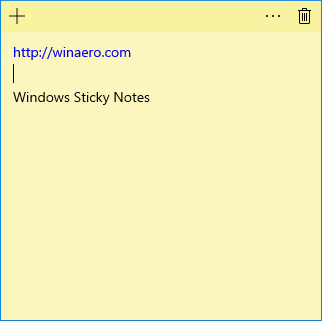 A new version of the app was released today by Microsoft. The most interesting change is the ability to create a new note using jump lists via the taskbar. Another interesting feature is support for kaomoji (Japanese emoji).

Please keep in mind that this update is only for Windows 10's UWP app. The classic sticky notes program which was available prior to Windows 10 Anniversary Update won't be updated.

You can get the update here:

Get Sticky Notes for Windows 10

Many users still prefer the good old classic Sticky Notes app. The classic app consumes notably less system resources. It starts immediately and works much faster. The performance difference is especially visible on less powerful hardware like Atom and Celeron CPUs. The notes themselves are also a bit smaller, so users like their compact appearance more - especially mouse and keyboard users who do not use touchscreens.

If you are one of those users, you can get the classic Sticky Notes in Windows 10:

You are here: Home » Windows 10 » Create New Sticky Notes From Taskbar In Windows 10