Traditionally, the user agent string is used by web developers to optimize their web apps for different devices. This allows developers to differentiate various device classes like tablets, phones, Desktop PCs and laptops, and more. The user agent string can provide web servers some details about the user's operating system, and the browser version.

Firefox as of this writing ships with the new Quantum rendering engine. Also, it features a refined user interface, codenamed "Photon". The browser now comes without support for XUL-based add-ons, so all of the classic add-ons are deprecated and incompatible. See

Thanks to the changes made to the engine and the UI, the browser is blazingly fast. The user interface of the app is more responsive and it also starts up noticeably faster. The engine renders web pages much faster than it ever did in the Gecko era.

To change the user agent in Firefox, do the following.

Here are some typical user agent strings you can use.

More can be found on this web site: UserAgentString.com

The general.useragent.overridepreference option applies to every open tab in Firefox and persists until you change or remove it. It remains enabled even if you close or re-open the browser. 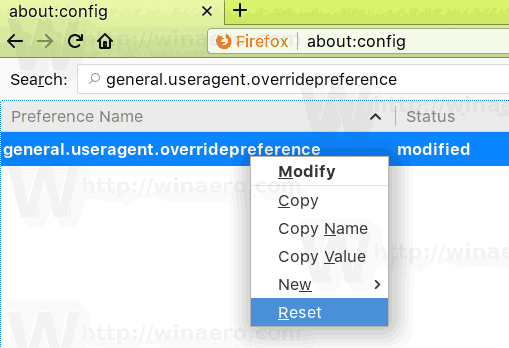 Change the user agent in Firefox with an extension

If you are switching the user agent in Firefox frequently, you can save a lot of time and use the following extension:

Navigate to the link above and click on "Add to Firefox".

This add-on is a revived version of the classic and popular User-Agent Switcher and is written with web-extensions API. The old version can't be used in modern versions of Firefox. This one is compatible with Firefox Quantum.

You are here: Home » Firefox » How To Change User Agent in Firefox

3 thoughts on “How To Change User Agent in Firefox”