How to Block Websites Using the Hosts File in Windows 10

Every Windows version comes with a special Hosts file which helps resolving DNS records. In addition to your network configuration, the file can be used to define a domain=IP address pairing which will have priority above the value provided by the DNS server. Using this trick, you can block certain web sites from opening in the web browser on your computer.

This trick is also useful in many other situations. For example,  web devs can make their computer resolve a domain to a localhost address. If you have a home LAN, mapping a network device name to its IP address with the Hosts file will allow you to open the device by its name from File Explorer. This is useful when your network devices run a bareboned Linux distro which doesn't provide names Windows can recognize over the network.

The Hosts file is just a regular text file which can be modified using any text editor. The only catch is that the editor app should be started elevated (as Administrator). The hosts file is located in the system directory, so non-elevated apps will fail to save it.

The Hosts file consists of lines of text. Each line must include an IP address in the first text column followed by one or several host names. Text columns are separated from each other by white space.  For a historical reason, <Tab> is often preferred, but spaces will also do the trick. Lines started with a hash character (#) are comments. Windows ignores blank in the hosts file.

Note: Use one entry per line. Entries should look as follows:

How to test the changes

To test the changes you have made, open a command prompt and use the ping command to see the address in the output.

In my case, the remote address of the google.com domain will be resolved to my local computer. 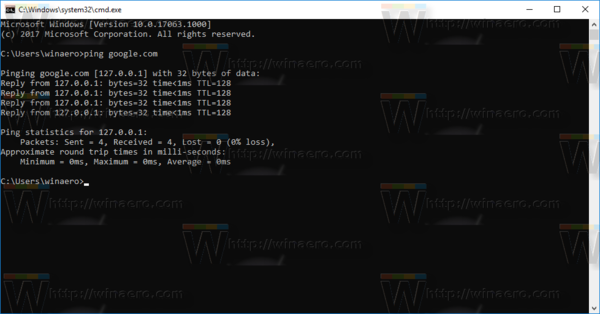 Finally, you might want to unblock a blocked web site. Here's how it can be done.

To Unblock Websites Blocked in the Hosts File,

Note: Adding the comment symbol is useful when you want to temporarily unblock an web address, or block/unblock it on demand.