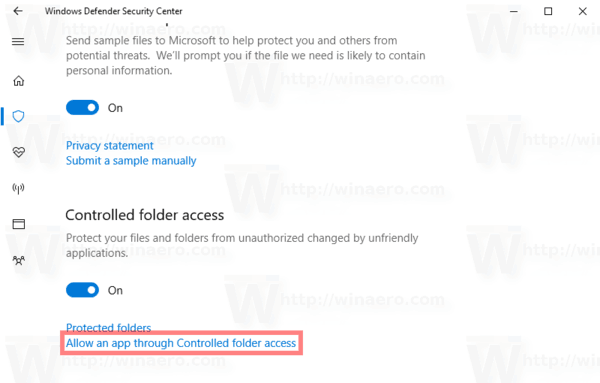 Controlled folder access monitors the changes that apps make to files in certain protected folders. If an app attempts to make a change to these files, and the app is blacklisted by the feature, you’ll get a notification about the attempt. You can complement the protected folders with additional locations, and add the apps that you want to allow access to those folders.

The Controlled Folder Access feature is first introduced in Windows 10 build 16232 as part of the Windows Defender Antivirus app.

Check out the following article:

The "Allow app through Controlled Folder Access" context menu command will be available when you right click an executable file (*.exe). Before proceeding, ensure that your user account has administrative privileges. Now, follow the instructions below.

To add the Allow App Through Controlled Folder Access context menu in Windows 10, do the following.

Now, right-click on the app you want to allow through Controlled Folder Access. You will get the following context menu entry: 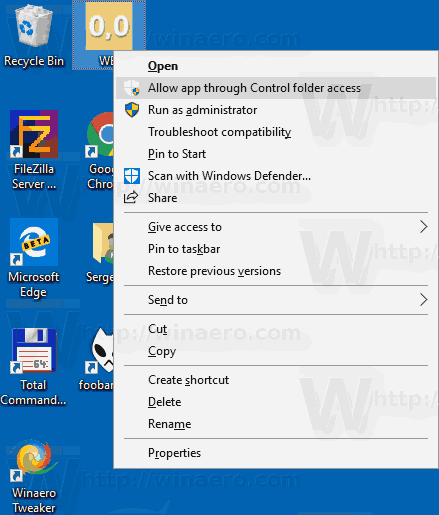 This is very time saving.

The command launches a new instance of PowerShell and executes the cmdlet Add-MpPreference. The Add-MpPreference cmdlet modifies settings for Windows Defender. Use this cmdlet to add exclusions for file name extensions, paths, and processes, and to add default actions for high, moderate, and low threats. Also, it allows adding apps to Controlled Folder Access by running it as follows:

The undo tweak is included to the zip archive mentioned above.