In its latest report for February 2021, Adduplex informs that the most recent version of Windows 10 has reached 20% of market share with a 3.8 points increase compared to January 2021. Because there is no official statistic from Microsoft, developers need to rely on less accurate reports from similar to Adduplex agencies. The latter gathers its data from around 80,000 PCs with apps that include Adduplex SDK. In other words, this data is not that accurate.

By the end of February 2021, Windows 10 May 2020 Update (2004) remains the most popular version of Windows 10. It accumulates around 41.8% of all the Windows 10 PCs on the market. Despite not being the latest release, Windows 10 2004 keeps increasing its market share due to the end of support for previous versions, namely Windows 10 1809 and 1903. Microsoft now forces updates for the users of these releases, hence the rise of Windows 10 2004. 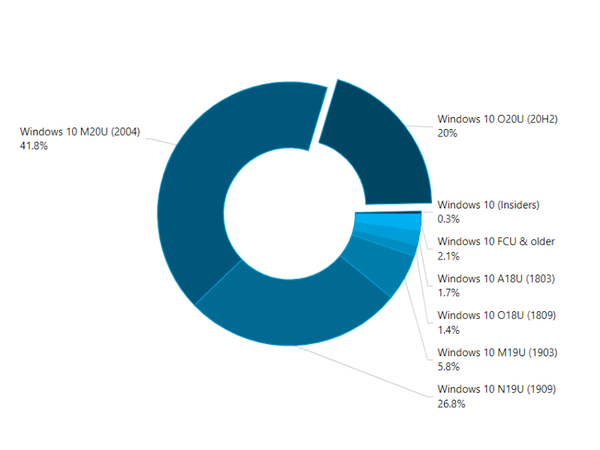 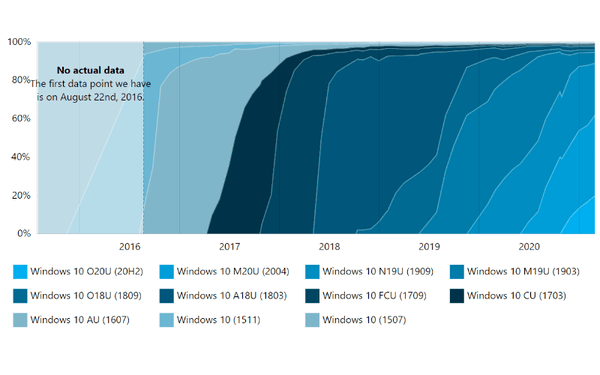 With the reach of 20% market share, Windows 10 20H2 slowly approaches Windows 10 1909, currently holding second place. Adduplex reports that this operating system has 26.8% of all Windows 10 PCs. In February 2021, it lost around 4.4 points to the more recent releases.

Windows 10 20H2 became available on October 20, 2020. A relatively slow rollout is not difficult to explain, considering how little to no new features available in this update and new update policies. The company does not force installing new feature updates as soon as they become available. Instead, it allows users to stay on the current release as long as it remains supported. This change led to much slower updates rollouts and a more fragmented market share. Still, users can now enjoy more freedom and less stress with unreliable updates that need more polishing.

In similar to Windows 10 20H2 fashion, the first “major” update for Windows 10 in 2021 will be quite an insignificant one. A couple of days ago, Microsoft announced Windows 10 21H1 with the scheduled release somewhere this Spring. A more substantial release with lots of changes and visual refinements is to arrive in the second half of the year.