Microsoft has finally updated the Windows 10 upgrade offer notification and added a clear option to decline it. Windows 7 and Windows 8.1 users now have an explicit option to cancel the upgrade.

The Windows 10 upgrade offer is known to be very aggressive in prompting or deceiving the end user using Windows 7 or Windows 8.1 to upgrade. Microsoft has been changing its user interface regularly, and coming up with various tactics to convince users. For the duration of the upgrade offer, Microsoft has automatically re-enabled the KB patches on Windows Update several times which the user had hidden. They removed the cancel button from the user interface, auto-downloaded huge setup files in the background and eventually made the Close button start the upgrade! See these articles:

Finally, Microsoft has changed the user interface to add the missing decline option. This may be because of the lawsuit which Microsoft lost against a businesswoman. They had to pay her $10000 because Windows 10 got installed automatically on her PC and blocked her from her business tasks for several days. 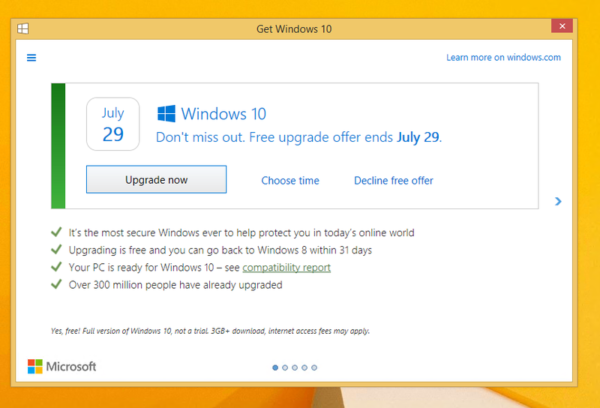 It still comes with options to install Windows 10 right now and to schedule the upgrade. But now, a third option gives the user a clear way to decline it.

According to Microsoft, the free upgrade offer should end by July 29, 2016, so after that time, the nags should disappear for everyone who doesn't wish to upgrade. If you are one of these users, the following articles might be of interest to you: