Microsoft is going to bring more artificial intelligence features to Windows 10. Recently, the company revealed a new AI platform called "Windows ML" which stands for Machine Learning. It will be included in the next major Windows 10 version, "Spring Creators Update". It will allow Store and Desktop app developers to utilize existing pre-trained machine learning models in their apps. 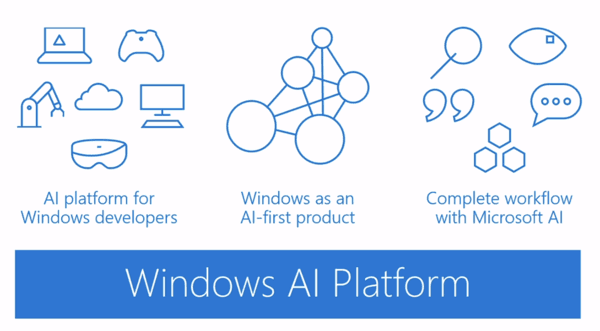 With Windows ML, it will be possible to import existing learning models from various AI platforms and then use them to power up real-time analysis of locally stored files like images, videos, documents or even maintenance tasks such as rebuilding the search index.

Many existing AI tools require cloud connectivity today but the ML platform SDK will have tools to allow developers to do AI tasks on the device itself. For more computationally intensive tasks where the CPU and GPU fall short of processing power, Microsoft will utilize Intel's new Myriad X computer vision processing unit (VPU) for handling all artificial intelligence (AI)-related local processing on Windows 10 devices and offload most of the work from the cloud.

Some of these applications rely heavily on the cloud whereas some A.I. features already work locally.

According to Microsoft, Windows ML will be available on a whole range of Windows 10 devices including traditional Desktop PCs, laptops and tablets, IoT devices, Mixed Reality devices, and servers. It is expected that the operating system will maintain performance of the AI subsystem automatically depending on the hardware present in order to get it working well.

A preview version of the new AI platform is available in Visual Studio Preview 15.7. The development suite will allow building both Desktop and Store (UWP) apps powered by Windows ML for all Windows 10 editions.

These details were shared by Microsoft at the Windows Developer Day Event in March 2018. More details and examples of A.I. applications will be revealed at Build 2018 Developer Conference.

2 thoughts on “Windows 10 is getting Windows ML, a new AI platform”