Windows 10 "Anniversary Update" version 1607 features offline scanning with Windows Defender. While the feature itself is not new for those who are familiar with Defender and use it, it has now become part of Windows for the first time. Today, we'll see how to launch it from PowerShell.

Earlier, Microsoft made available Windows Defender Offline via a special bootable environment. Windows 7 and Windows 8 users could download it, burn it to a disc or a USB flash drive, and then boot it to perform the scan and remove malware from a non-infected, clean environment.

This required an external bootable disk. There are many third-party software makers offering the same functionality, such as Dr. Web or Kaspersky Anti-virus or the free Avira or Avast.

The situation has changed with Windows 10 "Anniversary Update". Windows 10 version 1607 features the ability to perform an offline scan with Windows Defender right from the Settings app. 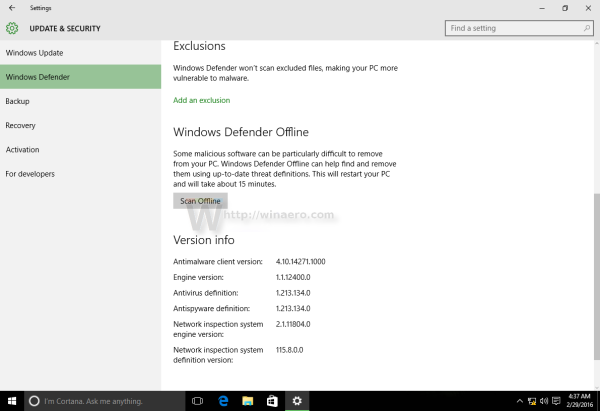 The same can be done with PowerShell.

To start an Offline Scan with Windows Defender from PowerShell, do the following.

Tip: you can create shortcut to Windows Defender offline scan in Windows 10.

You are here: Home » Windows 10 » Start an Offline Scan with Windows Defender from PowerShell