A new post on Windows 10 Insider Feedback hub revealed a new upcoming feature of Windows 10. It is currently called "InPrivate Desktop". It adds a native sandboxed environment which will allow executing of untrusted apps in a secure isolated sandbox that will prevent apps from making any harmful changes to the OS.

The text on the Feedback Hub states the following.

"InPrivate Desktop (Preview) provides admins a way to launch a throwaway sandbox for secure, one-time execution of untrusted software," the Feedback Hub questions explains. "This is basically an in-box, speedy VM that is recycled when you close the app!" 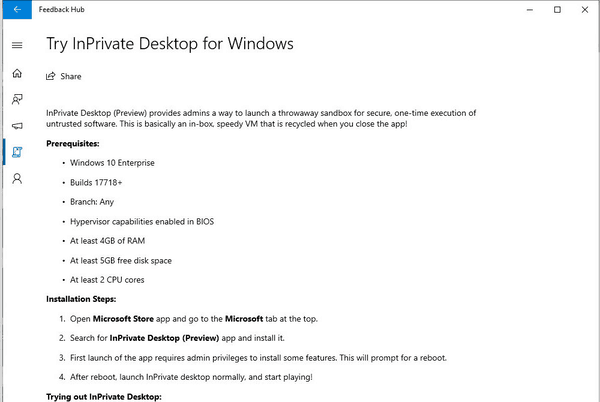 The new feature is being targeted at Windows 10 Enterprise. The minimal system requirements for InPrivate Desktop are as follows.

1. Open Microsoft Store app and go to the Microsoft tab at the top.
2. Search for InPrivate Desktop (Preview) app and install it.
3. First launch of the app requires admin privileges to install some features. This will prompt for a reboot.
4. After reboot, launch InPrivate desktop normally, and start playing!

Unfortunately, the Store page for InPrivate Desktop is not available any more. It has been removed by the company. Also, the Feedback Hub page is now removed too, so there is no way to try out the new app.

The InPrivate Desktop feature could provide a quick and useful way to test various apps in a secure environment. It could be a good, lightweight virtual machine alternative that allows testing apps without installing Hyper-V, VirtualBox, or VMWare guest OSes. Unfortunately, it is not known when it will be available to end users. Also, it may remainexclusive to Windows 10 Enterprise, leaving users of other editions alone in the dark.

You are here: Home » Windows 10 » InPrivate Desktop is a Sandbox Feature in Windows 10