Ever since Microsoft redesigned the taskbar in Windows 7 and simply declared it as a superior one, long-time users of Windows have been frustrated at being unable to use it the way they were accustomed to in classic versions of Windows. Not only did the reimagined taskbar change the design of many features without giving any choice but it also eliminated some features of the classic Taskbar. Let us see how we can make the new Taskbar work exactly like the good, old classic Taskbar. You will need to install a free third party program.

Not all features of the Windows 7 and Windows 8 taskbar are bad. It does have some genuine improvements such as larger icons, the ability to rearrange icons of running apps, jump lists, and a system tray where you can easily drag and drop icons in and out of the overflow area for notifications. There are also some subtle improvements such as the date being always visible, progress bars on taskbar buttons, icon overlays to indicate status and Thumbnail Toolbars.

The new concept of pinning takes over the responsibilities of the Quick Launch toolbar but doesn't quite let you pin everything. There are definitely some improvements, but there is no reason why users should put up with the loss of many classic Taskbar features such as not being able to:
●  Separate running apps from the non-running/pinned apps
●  Access the right click (context menu) using only the mouse
●  Ungroup multiple windows of the same app
●  Reduce the extra spacing between taskbar icons and notification area icons
●  See extra details in the tooltips of pinned apps
●  Have multiple columns of icons for running apps when the Taskbar is vertical
●  Select taskbar buttons and perform group actions on them such as group minimize, snap, close or cascade
●  Turn off the Always on top behavior
.....and several other limitations

The good news is that even though Microsoft does not consider giving users flexibility in customizing the Taskbar, a third party developer, RaMMicHaeL has taken it upon himself to fix all these issues and allow us to tweak the taskbar to our liking. His free app, 7+ Taskbar Tweaker, lets you configure the taskbar exactly the way you want and it does so using its own code, not by tweaking registry values. Let us see some of the features and options it offers to make the new taskbar behave like the classic one. 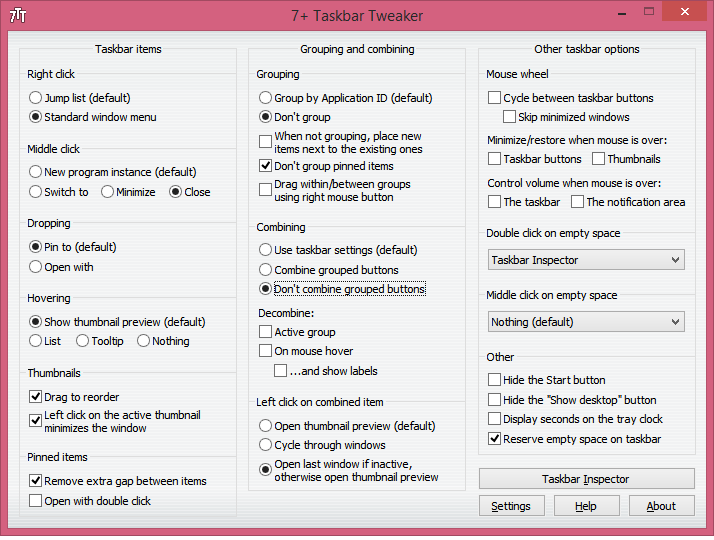 A walkthrough of basic options in 7+ Taskbar Tweaker:

What is the Taskbar Inspector: 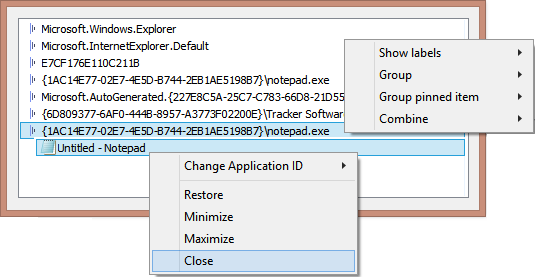 The Taskbar Inspector lets you view AppIDs of desktop apps (since only desktop apps get a taskbar icon as of Windows 8.1). I have written in the past about AppUserModelIDs which let you directly launch their respective target applications. AppIDs are stored in the registry (for Modern apps) and can also be stored inside shortcuts. Shortcuts with the AppUserModelID property are used by some desktop programs and all Windows 8 Modern apps for launching.

The Taskbar Inspector uses AppIDs to let you further control the grouping of taskbar icons per app! You can right click an AppID to control if that app always shows labels, or is always or never combined/grouped. You can also select multiple running apps/tasks in the Taskbar Inspector and right click them to group close, minimize or snap them (Tile horizontally and vertically). Once you open Taskbar Inspector, you can operate it using the keyboard too. Ctrl+A selects all items, and Ctrl/Shift keys let you select tasks, just as you would select files in Explorer.

You are here: Home » Windows 8.1 » Get a classic taskbar in Windows 8 and Windows 7 that works like XP