As you might be knowing, yesterday Microsoft released the long awaited November Update for Windows 10. The operating system identified itself as Windows 10 1511. It is available via Windows Update for everyone. However, some users didn't get this update. It is just not coming to their Windows 10 RTM PC. Here's why.

Microsoft published a FAQ for Windows 10 November Update 1511, which explained few possible reasons which can cause the update delivery issue. Check it out below to be sure you are not affected by any of those.

If it’s been less than 31 days since you upgraded to Windows 10, you won’t get the November update right away. They made this intentionally to allow you to go back to your previous version of Windows if you choose. After the 31 days have passed, your PC will automatically download the November update.

Reason 2: The defer upgrades option is enabled.
In Windows 10, there is an option which allows the user to defer upgrades. It can be found in the Settings app -> Update and Recovery -> Advanced options: 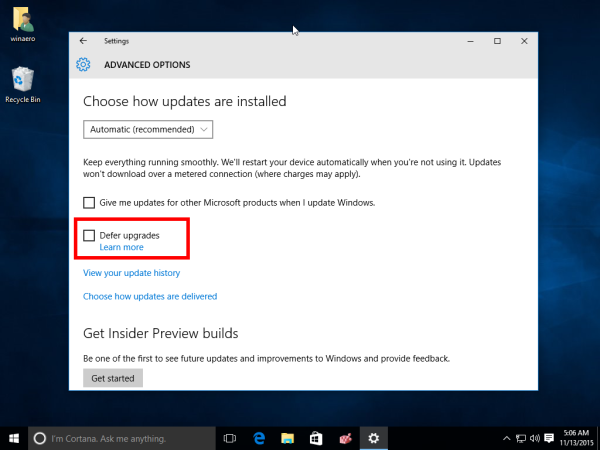 If the mentioned setting is turned on, you may not get the update immediately. Disable it and it will resolve the issue.

Reason 3: The uninstalled update.
In case if you received the November update but uninstalled it later, then you will not be able to install it again using Windows Update. It will be hidden for your PC and will not re-appear.

So, if you are affected by reason #1 or reason #3, you have to go to the Microsoft software download website and download the official ISO image file of Windows 10 Version 1511. This is the only possible way to get it installed on your PC right now.