How to Disable Extension Recommendations in Firefox 68 Add-ons Manager

Firefox 68 comes with a redesigned add-ons manager which features a revamped look of the user interface, the ability to report extensions, and more. Instead of action buttons, there is a extension menu with the commands that allow to perform various actions for the current add-on.

You can open its options, disable, remove, or report the extension. By selecting the 'Report' command, you'll be able to specify what is exactly wrong with the current add-on and submit your report to Mozilla.

Also, the new extension manager displays recommendation for extensions. This feature introduces the Recommended Extensions Program launched by Mozilla with Firefox 68, which includes a set of extensions reviewed and chosen manually. The recommended extensions meet Mozilla's highest standards of quality. Here's how it looks. 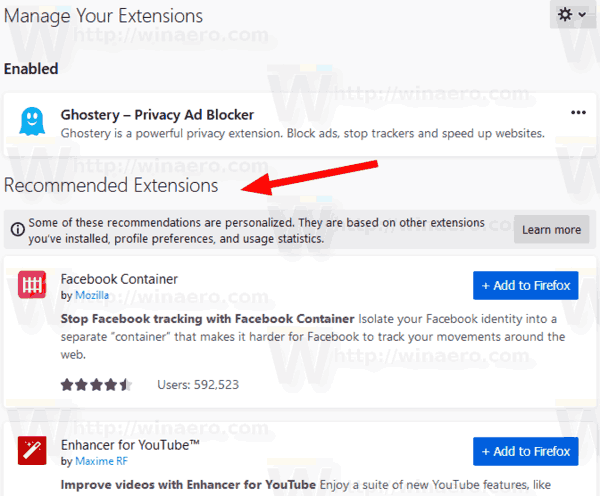 To Disable Extension Recommendations in Firefox 68,

Firefox 68 is a major release of the Quantum engine-powered browser. Since 2017, Firefox has the Quantum engine which comes with a refined user interface, codenamed "Photon". The browser doesn't include support for XUL-based add-ons any more, so all of the classic add-ons are deprecated and incompatible.

The detailed change log for Firefox 68 can be found HERE.

You are here: Home » Firefox » Disable Extension Recommendations in Firefox 68