Sometimes you need to rename your Linux Mint computer and change its host name. This can be done without a restart. Let's see how you can modify the PC name.

Linux Mint stores the PC name in a couple of files. To rename it, you need to edit those files. Once you edit them, you need to restart your PC for the changes take the effect. However, you can avoid the reboot if you follow the trick below.

To Rename Computer in Linux Mint and Change PC Host Name, do the following.

That's it! You just renamed your Linux Mint PC. A new terminal instance indicates that the change has happened. 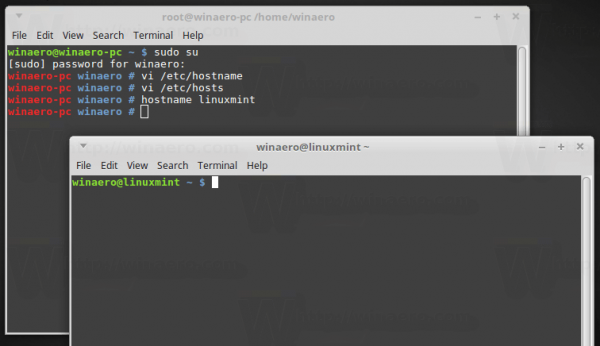 Linux Mint is one of the most popular distros these days. The operating system has different editions with various desktop environments. The team behind the distro ships ISO images with XFCE, MATE, Cinnamon and KDE. The method described above is suitable for any desktop environment.

The popularity of Linux Mint can be explained by two major factors. The first is that it's Ubuntu based, so it has a lot of software available for it and good hardware support as well. It is compatible with almost all Ubuntu apps and drivers. The second reason is that it has user environments with the traditional desktop look. Desktop environments in Linux Mint provide a classic taskbar, an Apps menu and the system tray along with the menu bar for all apps. This makes them attractive for users who cannot stand the user interface changes made in Gnome 3 and Unity.