How to Remove the Feedback Smiley Button in Microsoft Edge Chromium

Microsoft Edge, the default web browser of Windows 10, is moving to a Chromium-compatible web engine in the Desktop version. Microsoft explains that the intention behind this move is to create better web compatibility for customers and less fragmentation for web developers. Microsoft has already made a number of contributions to the Chromium project, helping to port the project to Windows on ARM. The company promises to contribute more to the Chromium project.

The developer preview builds of Edge, including Beta, Canary, and Dev versions, have a special feedback button with a smiley icon on the toolbar. The button helps to quickly send your suggestions and tell Microsoft about the issues you run into while using the browser. 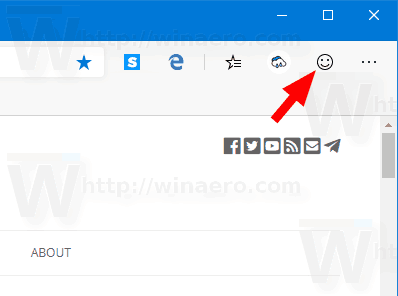 However, the stable version of the Chromium-based Edge doesn't include that button.

Update: Starting in Edge 79.0.298.0, there is an option in Settings that allows easily disabling the feedback smiley button. Check out this post for details. 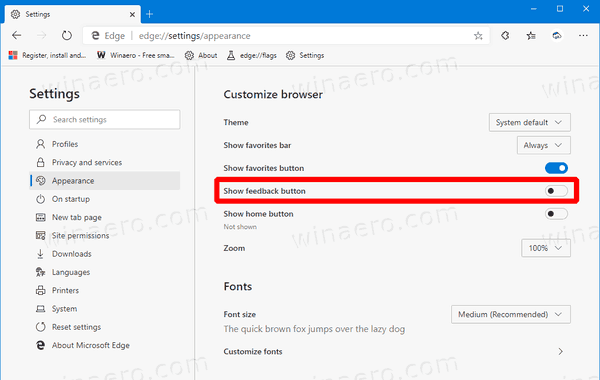 Enthusiasts were able to find the appropriate values to hide that button in Edge Chromium using two different ways. Here's how it can be done.

To Remove the Feedback Smiley Button in Microsoft Edge,

To restore the button later, use the provided file Add Smiley Button to Edge.reg.

The registry files add a 32-bit DWORD value UserFeedbackAllowed under the key HKEY_LOCAL_MACHINE\SOFTWARE\Policies\Microsoft\Edge. See how to go to a Registry key with one click.
Its value data:

Note: Even if you are running 64-bit Windows you must still create a 32-bit DWORD value.

This will remove the smiley button from Edge Chromium.