One of the recent Windows 11 dev builds removed the option to open the legacy "Network Connection" UI found in Control Panel. Instead of launching the classic UI, the ncpa.cpl command was redirecting users to the modern Settings app and its "Network & Internet" section. In a somewhat unexpected move, Microsoft restored the ability to launch "Network Connection" using the ncpa.cpl command.

Microsoft mentioned the change in the release notes for the latest Windows 11 preview build 22538. The company said the following:

For those who need it, you can access ncpa.cpl directly again.

Microsoft did not explain why it has decided to reverse the ever-going process of ditching the classic Control Panel in favor of the Settings app. Some users speculate that Microsoft chose to restore ncpa.cpl due to technical issues with the new UI. Of course, without official confirmations from Microsoft, consider that nothing but speculation. Still, there are reasons to believe ncpa.cpl is back not because of Microsoft's goodwill. 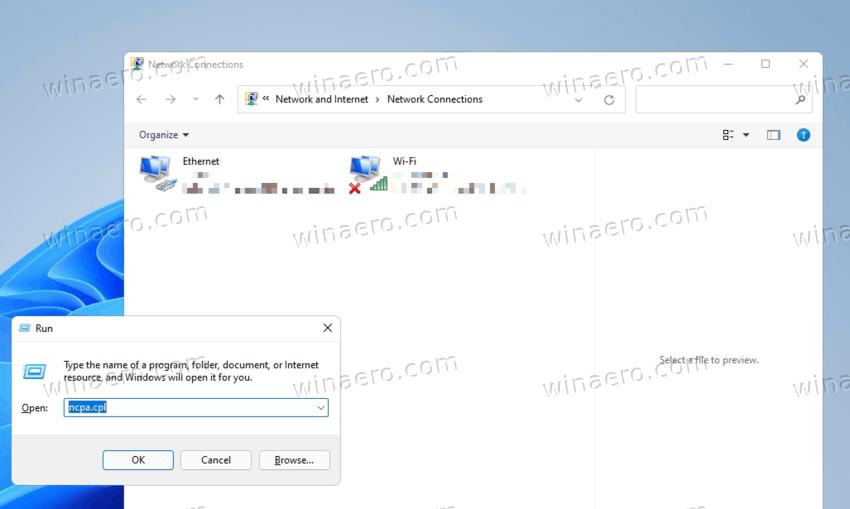 Every Windows update ditches chunks of the old Control Panel. More and more parts of the latter now redirect users to the Settings app. "Programs and Features" was the latest victim of Microsoft's ten-years-old migration from the Control Panel to the Settings app (there is no end in sight, so it might take ten more years to complete). Microsoft wants users to forget about the legacy Control Panel, but it simply cannot remove it altogether at once.

There is nothing wrong with upgrading outdated components of Windows. Still, the problem is that moving to modern UIs often comes at the cost of features more advanced users and IT admins still need. Microsoft frequently leaves behind some capabilities available only in legacy parts of the Control Panel, leaving enthusiasts and IT admins frustrated and unable to upgrade to newer Windows versions.

Whatever is the reason, ncpa.cpl is back in preview builds of Windows 11. It was always there in the stable version of Windows 11. This means managing and troubleshooting network connections in Windows 11 will be less stressful. For now, at least.

One thought on “Microsoft restored the ncpa.cpl command in Windows 11”