The keyboard layout indicator that pops on the screen when you press Win + Spacebar in Windows 11 is a victim of fancy animations and improved UI with bad optimization. Unlike Windows 10 and 8, where the indicator appears on the screen instantly, Windows 11 suffers from atrocious UI delays and bugs.

The keyboard layout indicator sometimes does not appear on the screen at all, causing significant frustrations for users with more than one input language. Fortunately, a fix is coming soon.

Microsoft released a new Windows 11 preview build with a large changelog and some significant improvements for all sorts of users. Apart from making the Windows Widgets button more useful and filling the blank space on the taskbar, Windows 11 build 22518 improves how the input language switcher operates. 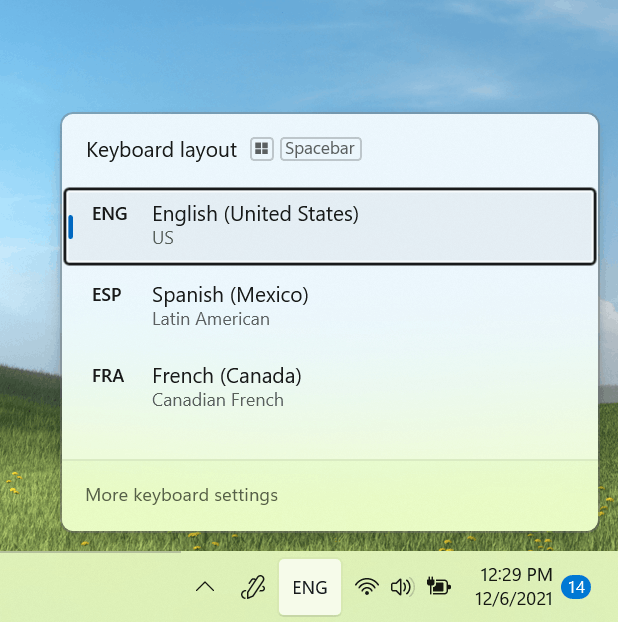 For starters, it looks better thanks to acrylic background. The language input flyout now feels more on-par with other fancy parts of the Windows 11’s UI.

More importantly, build 22518 brings under-the-hood changes to improve the overall performance and reliability of the input switcher. Microsoft says the flyout now should work faster and with fewer bugs. Also, the company urges Windows insiders with more than one input language to send their feedback to bring more enhancements.

Our initial testing revealed that the input switcher indeed works better in Windows 11 build 22518, although it still lags (literally) behind the same flyout in Windows 10. Still, it is good to know that Microsoft is aware that that buggy part of the UI needs more polish and performance improvements.

As with the weather forecast on the taskbar, the improved input language switcher is currently rolling out to Windows insiders in “waves.” This approach allows Microsoft to ensure stable release and monitor feedback before pushing new features to all users. You can learn more about Windows 11 build 22518 in our dedicated post.