Windows 10 Fall Creators Update (Redstone 3) comes with a new feature, called "Power Throttling", which should improve the battery life of laptop and tablets on processors which support it. Let's see how to find if apps are power throttling.

The main idea behind the feature is limiting the CPU resources for inactive apps. If some application is minimized or runs in the background, it still uses your system resources. For such apps, the operating system will place the CPU in its most energy-efficient operating modes – work gets done, but minimal possible battery is spent on that work. A special smart algorithm will detect active user tasks and keep them running, while all other processes will be throttled. The Task Manager can be used to find such apps. There is a dedicated column "Power Throttling" in Task Manager on the Details tab which will indicate this. Here is how to enable it.

How to Find if Apps are Power Throttling in Windows 10 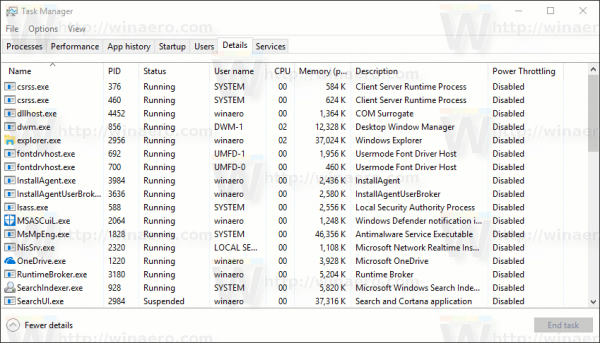 That's it. Now see how to disable Power Throttling in Windows 10 (Redstone 3).