Developer mode in Windows 10 allows the user to debug apps. It is extremely useful for developers. This mode replaces the Windows 8.1 requirement to obtain a developer license. It also enables a number of interesting options like app sideloading. Unfortunately, this feature is broken in the recently released Windows 10 Build 17672. Here's a quick workaround to resolve the issue. 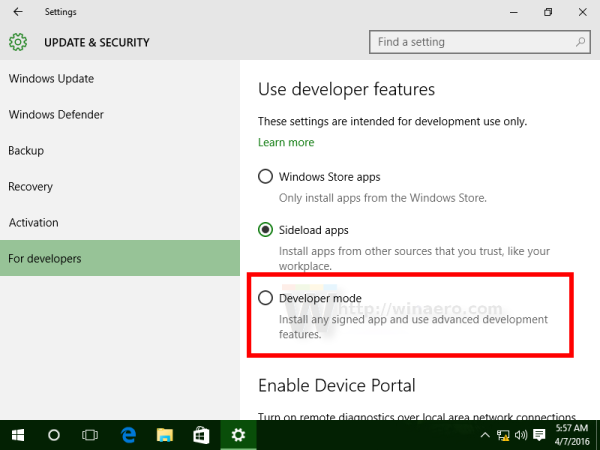 To sideload apps on Windows 10, all you need to do is enable the Developer Mode in Settings.

Developer options here are as follows.

Developer mode is covered in detail in the article

How to Enable Developer Mode in Windows 10

In Windows 10 Build 17672, the Developer mode feature is broken along with Features on Demand. If you try to add any optional feature or activate Developer mode in Settings, the process takes forever. The functionality is broken and will be fixed with the next Insider Preview release.

If you really need to activate this mode in build 17672, here's a workaround for you.


Credits for this trick go to Gustav M.